A trip across the Tasman finds fruition


It’s about time we shared some more of our touring experiences with the outside world because, so far, we’ve been enjoying ourselves enormously.  In fact, like my dad used to say, fancy doing what you love to do and getting paid to do it.  Well, that’s almost how it is with us. We love what we do and hopefully, in the not too distant future, we’ll be making enough money to pay our rent.

In the meantime, however, let’s get to our tours.  A few days ago, we had the good fortune to take a couple on a 3 day tour of discovery.  They had booked this tour six weeks previously, asking us to do 4 hours research for them because the female member of the duo, Louise by name, knew, without doubt, that her father had come from around Devonport, Burnie but she was unable to track him down.  They also requested we arrange their accommodation for the 2 nights of the tour we’d be spending in the north of the state, telling us how much they were prepared to spend on this. Even if I say so myself, we did well and the accommodation turned out to be excellent both nights.

Louise, who is in her sixties, told us that her dad had been an older father, a man in his sixties himself when she was born.  Her mother, who died some years ago, had told Louise what little Louise knew about her dad’s history.  In a nut shell, Louise knew the names of her born mother and her Tasmanian born father and that they’d married in in 1941.  Not a lot to go on.  But, fortunately, her father had a distinctive name – for the purpose of this tale, as we don’t have Louise’s permission to do otherwise, we’ll call him Tasman Royal Lucas.  That’s to say, the name had a ring to it, it was pretty unique, so we had something to work with.

Now, to cut a long story short, it turns out that Louise’s father, when he arrived in , simply shed his true surname and for the rest of his life went by the surname of Lucas and Lucas was, in fact, actually his 3rd given name.  He was born Tasman Royal Lucas Smith and he’d simply dropped the Smith. At this stage anyway, no one knows why, but that’s detective work for another day..

So, we picked up Louise and her partner, Bob, from their accommodation in mid morning on a cold and wintry day, glad that we’d stressed the need for really warm clothes during our earlier discussions.  Not that our warnings were necessary, Louise told us, because her home country was no tropical island.   Anyhow, we set off for Launceston which was to be our first port of call.  On the way, we detoured to have a look at Kempton and Oatlands, popped into Ross for lunch, walked through that lovely old town, taking a look inside the historic churches, stopped on the bridge to marvel at its beauty and then headed off to .  We stopped in too because our guests wanted to stroll the street, reading the names of the convicts on the paving bricks.

Then we were off to Launceston where, after checking into our accommodation, we spent what remained of the daylight hours wandering around beautiful Launceston loving its architecture and its old world charm. That evening, we dined well and slept like tops until the following morning, when bright and early, we took off for Latrobe.

It took us about an hour to get to Latrobe and what a wonderfully restored historic town Latrobe is.  Our guests loved it.  We had a tasty breakfast in a pleasant café and once again, using our legs to cart us around, we had a look at some of what Latrobe had to offer and that was plenty.  Historic buildings galore, plus the Axeman’s Hall of Fame and a visit to the town’s beaut family history room where a willing volunteer looked with us for evidence of Louise’s family’s presence in the town.  We didn’t find anything more than we’d already discovered, but Louise said that the photos she saw there and the information imparted by the volunteer meant she was forming a picture in her mind of how life must’ve been for her father and his family.  Finally, we visited St. Luke’s Anglican Church where, during our researching, we’d discovered Louise’s grandparents had married.  Louise was rapt.  Out came the camera, Bob became the photographer, and snap after snap of Louise and the church together were taken.

Then we traveled through Devonport, Penguin and Burnie to Wynyard, taking as much time as we dared to cover the miles because both Louise and Bob were muttering that they wished they had longer so that they could explore these towns, especially Penguin.  Louise loved Penguin and swears she’s returning to that gorgeous little coastal town some day.

Wynyard was a delight and, as Bob said, there was so much to see and do in the area that you’d need a week or more to do the area justice.  As it was, we had an hour or so around the town, enjoyed a cup of coffee and a delicious cake and took a look at Table Cape.  Table Cape is breathtaking and gazing out over Bass Strait, it wasn’t hard to feel admiration and enormous respect for the people who settled this rugged lovely island. They were tough.

Stanley came next and it was in Stanley that we truly made a great find.  What a stunning town!  What a stunning location! Story book stuff.  We all expressed our delight at being in Stanley and decided, after we’d eaten mouth watering fish and ships, washed down with a reasonable brew of coffee, that we’d climb the path to the Nut’s plateau and return via the chairlift.  Most people, we agreed, would do it the other way round but we also agreed that we needed the exercise.  You know how it is when you’re traveling any distance in the car; out comes the block of chocolate, out comes the packet of potato chips and before you know it, you’ve eaten the lot and you’re looking for more.  Anyway, on our way to the path up to the Nut’s plateau, we spied the family history rooms and decided to go inside to see if we could discover anything relating to Louise’s family.  The volunteer who looked after us was great.  She gave us a potted history of the little town and was giving us the low down on the old records available in the history room while I flicked through a baptism book that sat on a desk, when lo and behold, my eyes settled on the baptism record of Louise’s father and some of his siblings.  On the same Sunday, Tasman and one of his brothers and one of his sisters were christened at the Church of England at Stanley.

Well I shrieked with delight, as you do when you make such a discovery, and then Louise was shrieking too as she looked over my shoulder.  I considered myself a hero. Next, the volunteer was photo-copying the page for Louise and we all were scouring any records in the room.  We didn’t find anything else but somehow this didn’t seem to matter.  We were so excited by our discovery that I swear we flew up that winding path to the Nut’s plateau without feeling any pain at all.  The spectacular view at the top was awe-inspiring.

On the way out of town, we had a look at Woolnorth, an historic working property, taking in the old farm buildings, the wind farm and Cape Grim where the Bureau of Meteorology has measured the cleanest air in the entire world.  A great experience.

It had been a long rewarding day, and that night we slept comfortably at an hotel in Ulverstone, had a great breakfast at the same venue the next morning, did a quick tour of the town – another place Louise and Bob wished they could explore more fully – and headed back south.  On the return journey, we slipped into have a quick peek at the lovely Deloraine and the lovely Westbury, by-passed Launceston, dropped into Hagley, then went off to Longford, via a pleasant narrow country road, and stopped in that fine old town for lunch.  We had a look at Christ Church and its historic cemetery where Louise became quite excited when she saw not 1 but 4 headstones sporting her newly-learned family name.  Now, she didn’t know at that time, whether these graves were the resting place of other members of her clan, but she photographed the headstones and said that as soon as she got back to NZ, she’d be chasing information on these people.

After Longford, we zipped straight down the Midland Highway to Hobart, stopping just once for a cuppa at Oatlands.  Louise and Bob said that they had a wonderful time, and so did we.  In fact, so pleased were we with each others company, that we arranged to meet at 10 am the following morning at the Tasmanian Archives Office in Hobart so that we could assist Louise and Bob to use the couple of hours they had left in our state to find out more about Louise’s relies.  And we did pretty well that morning.  Being aware of her grandfather’s real surname, Louise discovered so much about her grandparents, her grandmother’s family and of course, her grandfather’s siblings.

Louise and Bob are back in NZ now and Louise, no doubt, via the internet, is already looking for more information on her family.  She should uncover quite a bit now that she knows their surname. We are going to keep in touch.
Posted by GenTree Australia at 11:01 PM 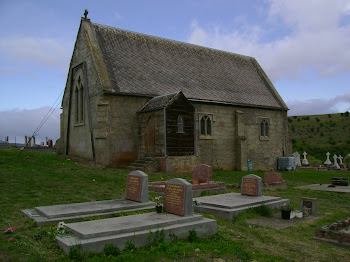 Visiting the relies at the historic St Mary's Church at Gretna

On tour: Grave of Betty King